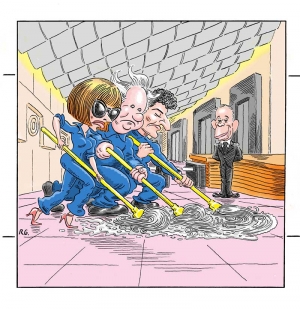 Three weeks after McKinsey & Company slipped its foot into the door of the emerald tower, Condé Nast staffers continue to ask what fresh hell they find themselves in.

“I saw Graydon in the cafeteria this week!” said one business-side insider, last Friday. “In all my years here, I’ve never seen him in my life there. He was behind me in the line at checkout with his little swipe card. He was milling around uncomfortably with the commoners.”

When our source first walked into the Frank Gehry–designed cafeteria at 4 Times Square, Mr. Carter was studying the options available at the stir-fry station. It wasn’t clear whether he actually sat down to eat lunch, but the sight of him put our source into a bit of a panic.

“That whole feeling of working here and it being cushy and other people loving it and being jealous? That’s kind of gone now,” said the source.

We’re still eight weeks away from McKinsey actually handing out down recommendations for whatever painful cuts they devise to help boost the publisher’s bottom line. But it’s clear, from interviews with Condé Nast employees—from editors to executives to editorial staffers to ad sales slaves—that the enchanting, mystical era of Condé Nast is pretty much over. Small perks—the mani-pedis for clients, the flower deliveries, the sodas in the fridge—disappeared a while ago. Some changes, such as the emergence of Vanity Fair editor and restaurateur Graydon Carter eyeing reasonably priced stir fry, are worrisome on a psychological level. A culture of paranoia has taken over. What all these things add up to is a hefty emotional toll on staffers: Is this what they signed up for?

Of course, it’s a terrible time industrywide. But somehow, the necessary belt-tightening seems to have changed the look and feel of Condé Nast even more than that of other publishers.

Some within the company, however, argue that Condé Nast is just the same as everyone else, and is weathering the storm the same, too.

“The way to put it is: Should we be more worried than anyone else?” said Condé Nast CEO Chuck Townsend in an interview with The Observer. “How worried are you? Do you know what I mean? Here we are sitting in this rotten economy that in duration and in depth has exceeded anything any of us have experienced in our lifetime, bar none, and it produces a very worrisome situation. It’s universal. I don’t see how Condé Nast is different than anyone else.

“To a certain extent, all discretionary expenses in this business climate have to be managed much closer to the vest,” continued Mr. Townsend, referring to all the perks that separated Condé Nast from a place like Hearst. “All discretionary expenses. Right? Why? Because we have to make ends meet. We’re no different than anybody else. If we have less revenue, then we have less to spend.”

As the company prepares for a retrenchment of sorts, it appears The New Yorker will be immune from the pain that other editors and publishers in the building are anticipating.

In many ways, Mr. Townsend is right: Condé Nast, the elite standout of publishing houses of yore, doesn’t look much different than anyone else. The receptionists—other than on the 11th floor, a.k.a. the executive floor—have been fired, the newspaper subscriptions are gone. But that’s the point: Isn’t Condé Nast supposed to be different?

And there’s more to come. McKinsey has a long list of people to talk to. So far, consultants have made their way through about a fourth of the list, talking first to circulation and manufacturing directors, one insider said.

Over the next few weeks, editors and publishers will meet McKinsey consultants to face probing and uncomfortable questions about how they justify, say, paying $10 a word for a certain writer.

The Observer has learned, however, that New Yorker editor David Remnick will be exempt from meeting with McKinsey, as will anyone from the editorial side of his magazine. Two well-placed sources said that Condé Nast’s chairman, Si Newhouse, reached out to Mr. Remnick shortly after the McKinsey announcement was made and told him not to worry about anything—the magazine would be just fine, and neither McKinsey nor company executives would be mucking with his editorial costs. (Mr. Remnick declined to comment, and Mr. Townsend said, “When Si and David speak at the lunch they have periodically, God knows what’s communicated between them.”)

Obviously, any companywide cuts would still affect the magazine, but as the company prepares for a retrenchment of sorts, it appears The New Yorker will be immune from the pain that other editors and publishers in the building are anticipating. It turns out the popular line from several Condé Nast insiders over the last few weeks—“There are no sacred cows”—is only partially true.

WHEN WE ASKED Mr. Townsend with whom McKinsey would be meeting, he said, “This is an eight-week period and they are going to meet with as many people as they realistically can, but I haven’t given them a list of people to meet with.

So with three weeks completed, and eight weeks to go before McKinsey is gone, how does Condé Nast look to those at the top?

“I’ll tell you right out front that things—by that, I mean actions surrounding the actual putting out of magazines—are not appreciably different,” emailed Vanity Fair editor Graydon Carter. “If you didn’t know the magazine economy was off the way it is, you’d never detect it from walking through the offices here.”

“We just got new computers, and there’s still film in the camera and we’re more than able to do the most important thing, which is to publish the best possible work and pay well for it,” said New Yorker editor David Remnick.

“I think the reality is that every successful magazine editor has had his or her eye on the bottom line for a long time,” said Glamour editor Cindi Leive. “The stereotype, even at the most glamorous fashion magazines, of the editor who has three-hour lunches and whisks away on a private jet every weekend is probably just a stereotype. We’ve all been thinking about budgets for quite a long time and probably wouldn’t be able to keep our jobs if we weren’t.”

But in conversations with all sorts of staffers on both the edit and business sides, we heard a slightly different story. “I really think twice about using a car now, and these drivers, their business is down between 50 and 70 percent,” said one business-side insider with access to a car. “These drivers are basically losing their entire livelihood. My driver said he’s going to probably sell his car and open a pizza parlor.”

And don’t even think about treating a client to body treatment.

“Going to the spa is no longer a form of client entertainment,” said the business insider. “Women at this company will take clients to massages or mani-pedis. If your face is in a face cradle, that’s not going to be considered client entertainment anymore!”

It used to be that on Monday mornings, the flower deliverymen would clog the elevators while they brought fresh bouquets for editors’ and publishers’ desks.

“You don’t really see them anymore,” said a source.

“In the old days, everyone sent gifts to everyone else,” said another source, a senior editor. “If someone had a baby, they might get eight deliveries of flowers from the office. And everyone would expense it. The elevators used to be full because all the deliverers would come up with the passengers. You would ride the elevators, there would be lots of flowers and all sorts of gift bags and you’d try to look at the name tags of the people getting them. But there’s not many of those rides on the elevators these days.”

But what about dinner with a source or a client?

“Now we say things like, ‘Let’s go to Pret A Manger instead of going to Sushi Zen—let’s get sandwiches instead,” said another source.

Or, that source added, lots and lots of coffee instead of dinner and drinks.

Same goes for executive-to-executive lunching. Our source told us a story: “At the end of the lunch, she asks me, ‘Do you want to split it?’ And I was thinking, ‘How aren’t we expensing this!’ Going out to lunch, even among two executives, and we’re worried about expensing it because of the meaning it might take.”

“You have to choose carefully where you dine,” said another source. “When a client wanted to go to get Japanese, you used to say, ‘Ooooh! We’ll go to Nobu!’ But it’s so outrageously expensive, now you have to think twice.”

Now, you can try the deli downstairs. Or the cafeteria.

“There are suddenly more people in the cafeteria,” said one editorial insider. “It’s getting kind of cutthroat with placing your stuff there to save a seat, especially near the window. You can’t really get a seat ever.”

And that’s before you deal with the changes in the food.

“At the salad bar, you’re allowed one protein and generally they have five proteins listed,” said this source. “But the only proteins they have now are tofu and chicken! There’s no shrimp! I don’t think there’s any more shrimp there.”

(“If there’s more tofu than beef at the stir fry bar, then we’ll probably be even healthier,” quipped Mr. Remnick.)

“When I started, there was this little refrigerator, and it was stocked with amazing drinks,” said one ad-sales source. “Pellegrino, Orangina, Red Bull. And like the water wasn’t Poland Spring, it was like Fiji. I remember when I started working here, I emailed everyone I know and I was like, ‘I have to tell you about the drinks!’”

But then in December, a few months after Condé Nast ordered publishers and editors to cut 5 percent from their budgets, the drink supply emptied out. That Fiji water turned into Poland Spring. Worse, instead of the fridge, the water bottles were stowed in a warm closet.

And then: “I just found out today that we are on our last batch of Poland Spring,” said the source. “We won’t have any more after this. We have to start drinking tap water.”

Still, Mr. Townsend doesn’t think these lifestyle changes add up to much, even if they make Condé Nast seem, at least from the outside, less enviable.

“The Red Bulls and Oranginas are maybe no longer there, but what’s the difference?” he asked. “It’s still the quirkiest place on the face of the earth. A lot of that quirkiness makes us special. A lot of that quirkiness makes for interesting observations. But it has absolutely nothing to do with anything, so where’s the line drawn? I don’t want to lose the speciality or the quirkiness, but a lot of this stuff that has been part and parcel of it is just meaningless.”

I asked Mr. Townsend what he meant by that.