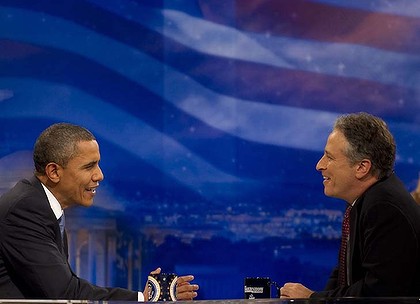 As explained by Tim Dick from the Sydney Morning Herald
For quality news, Stewart's no joke

JON STEWART is a comic genius but is he a journalist? As far as the US media academic Marty Kaplan is concerned, after 15 years on air, Stewart's The Daily Show produces some of the best journalism in America.

''I'd be glad for a 24-hour comedy news channel,'' he said after teaching a class at the University of Sydney's US Studies Centre this week. ''Typically, on an American news show, a major story runs a minute and a half. A Jon Stewart segment can be six, seven minutes.

''You can't get the jokes on Jon Stewart unless you understand what it's about. He takes the time to explain stuff to you and, in doing that, he's a journalist. He denies that; he says he's a fake journalist. I can understand why he says that but, just by running video, he's both conveying information and juxtaposing the clips - whether it's a news source or a politician - he's holding people accountable.''

The professor of media, entertainment and society at the University of Southern California and Huffington Post blogger said: ''That strikes me as the best journalism going on anywhere right now.''

Professor Kaplan pointed to one study that tested people on current affairs. Those who watched local television news did worst, and those who watched The Daily Show and Stephen Colbert did best.

Another study, by the University of Pennsylvania in 2004, found those who watched late-night comedy programs, a particularly American phenomenon (although the Ten Network's 7pm Project shares elements of it), were more likely to be familiar with the positions of presidential candidates than those who did not.

And in a study Professor Kaplan led of television news in Los Angeles, every minute of news broadcast on every channel was counted and analysed to form a composite half-hour of news. In such a broadcast, five minutes would be spent on sport and weather, three minutes on crime and two-and-a-half minutes on entertainment. By contrast, the local economy would get 29 seconds of coverage, and the combined total for every level of government would be just 22 seconds.

''There's an industry of consultants telling local station owners and managers that politics and public affairs is ratings poison,'' Professor Kaplan said. ''You go there, people will change the channel.''

But good reporters saw politics as drama, with personality, conflict, narrative and suspense, and delivered it in that way, rather than declaring something inherently too complicated or dull to sell.

''You don't have to dumb it down to tell it that way, you just have to tell a story,'' Professor Kaplan said. ''If you apply to politics and public affairs the same skills that you're so brilliant at applying to crime and scandal and sex, then you will grab and hold your audiences and be No. 1 in your market.''