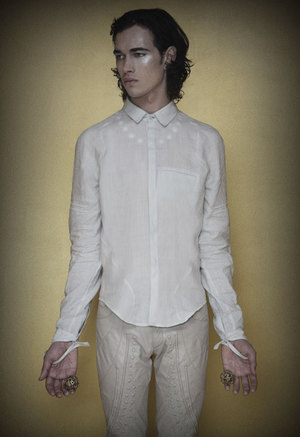 Diesel stores worldwide host “Ancient Plastic” capsule collection by Taro Horiuchi
The brand new Diesel Award at ITS#SEVEN: 50.000 euros and an experience in DIESEL CREATIVE TEAM.
International Talent Support, the platform for young talents from all over the globe, is collecting the enrolled projects from which ITS#SEVEN finalists of the three areas (ITS#FASHION, ITS#ACCESSORIES and ITS#PHOTO) will be selected to show their creativity at the event to be held 18-19 July 2008 in

.
During the year, between the different editions, chances and opportunities connected with the previous events and prizes become reality. Taro Horiuchi, Japanese, with an MA at Hogeschool Antwerp, entered into the fashion world working with the Raf Simons team in Paris from 2004 to 2007. Taro, finalist during the sixth edition of International Talent Support, July 2007, won the prestigious Diesel Award, which gave him the chance to work for over three months as part of the Diesel Creative Team, an international group of over 40 designers - headed by Creative Director Wilbert Das -among which Teppei Sugaya and Christoph Froehlich winners of the Diesel Award at ITS#TWO and ITS#FOUR respectively.
The creative allure of the experience, blended with Taro’s rich and different inspirations, drove him to a collection which mixes different flavours and elaborates new forms. The result is concretely represented by his capsule collection, produced by DIESEL and ready to be distributed in the most important DIESEL stores worldwide. Through clean lines and basic pieces “Ancient Plastic” expresses the combination of simplicity and individual uniqueness of human beings relating with God.
Last but not least the young fashion designer flew from Trieste to Japan, for Tokyo Collection Week, he (together with some more former ITS finalists) had been chosen to be part of "New Designers Met in Europe", an exhibition focused on emerging talents set as a side show during Tokyo Fashion Week, promoted and supervised by Issey Miake.
“Ancient plastic” will be the last capsule collection designed by The Diesel Award winner. With the aim to ensure that fashion students' dreams become reality, by offering them a tangible way to support their breakthrough into the international fashion scene, from ITS#SEVEN on the prize will be transformed. The Award will consist of a cash prize of € 50,000 that the winner can use, without limitations, to promote their work in the best possible way and to invest in their career. On top of that, the winner will be offered an internship within the Diesel Creative Team, headed by Diesel's Creative Director, Wilbert Das, at its HQ in

and discover all the secrets of working in an innovative fashion company.
From March 2008, Taro’s name-labelled collection, will be available in Diesel flagship stores around the world - Milan, Paris, Berlin, New York, Tokyo, Osaka, London and Brussels just to name a few …check it out!
ITS#SEVEN is created and organized by EVE, DIESEL is ITS’ presenting partner, the first one that believed in the project and supports young fashion talents with concrete opportunities; ITS#ACCESSORIES is partnered by YKK, ITS#PHOTO is partnered by MINI. Air Dolomiti is the brand new partner of this edition and Develon is once again our internet partner.


( I just copied and pasted this newsletter I got from ITS, as I really support what Barbara and her team at Eve in Trieste are doing for young designers, plus I was at this event last year in July-click archives and  then July 2007 , scroll down to see the picturses )