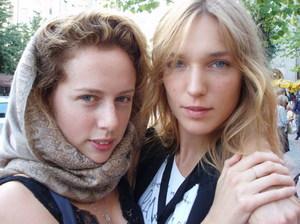 Naomi Itkes-Sznap is a stockholm stylist and runs her own magazine called Littces, tried to find a link for the magazine she does, but thereisn't one...yet, and she is here in the photo with her friend Anya, who is an international model that ha just signed a contract with a record company, she's is singing a performancein October in Paris, so I'll try to be there for it. We just had lucnh with Naomi, a film-maker Werner Hed and a curator Jelena Rundqvist's who has an exhibtion in the outskirts of stockholm, in a town called Tensta. We were scheduled to see a show, but they convinced us to instead go see the exhibition, as the fashion would be very commercial