So we just finished a nice dinner that Freddy & Aglaia made, Kerel , their son is upstairs asleep, and Wouter and Manami came to town for a visit from Paris, are cups are waiting and ready, our stomachs are satisfied 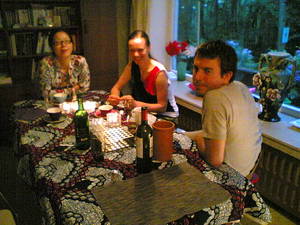 but we need something else 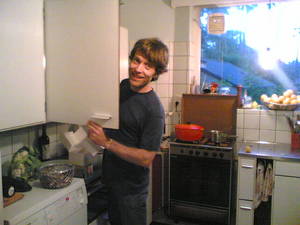 so Freddy is in the kitchen making coffee ,because Wouter and Manami brought some cake

Damn, that went so quick , I didn't even get the chance to take a picture of it 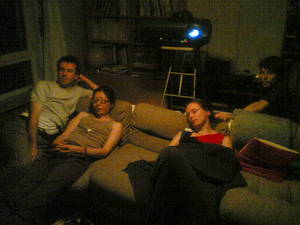 Freddy loves short movies, so tonight we are se-ing a few from around 1982 from some west Berlin underground collaboration, and after that a French/Belgium animation film called "les Triplet De Belleville" which I enjoyed.

Here we are sitting in the cinema couch, Freddy has a big screen and a projector set-up, nice to watch a movie .